The earth’s atmosphere is essentially a column of air.

As you might expect, because of gravity there is more pressure at the bottom of that column than at the top – since the top is essentially a vacuum, i.e., outer space. At altitudes where humans can live, barometric pressure decreases approximately at the rate of one inch of mercury per 1000 feet of elevation gain.

In addition, some programs use either inches of mercury or millibars.

The lowest BP recorded in the western hemisphere was 26.05 inches of mercury on October 19, 2005, during Hurricane Wilma. The highest pressure recorded in the world was 32.01inches at Agata, USSR, on 31 December, 1968.

What is referred to as “Army Standard Metro Conditions”, used in some ballistic programs, is a BP of 29.53 inches of mercury at a temperature of 59 degrees F. with a relative humidty of 78 percent.

The base condition of the ICAO Standard atmosphere is a temperature of 59 degrees F. at a barometric pressure of 29.92 inches of mercury, with zero percent relative humidity.

In order to calculate the elevation data necessary for accurate shooting, ballistic software must model the density of the air. Air density is computed using three inputs: atmospheric pressure, temperature, and the moisture content of the air. That means that you the user must specify those quantities to the program. Ballistic programs usually are programmed to input moisture data as a relative humidity figure.

Atmospheric pressure comes in two flavors, which we will refer to as station pressure and barometric pressure.

Station pressure for our purposes refers to the absolute atmospheric pressure at the measurement point.

Barometric pressure refers to the atmospheric pressure reported as if the reporting station is at sea level, irrespective of its actual altitude, referred to hereafter as SLBP. This is the kind of pressure reported by the National Weather Service and other weather reporting agencies and services. This is done so that people will have a common reference for the pressure.

If you live at or near sea level, as I do much of the year, barometric pressure and station pressure are the same. It’s only at altitudes higher than sea level that the difference becomes significant.

Now that you understand the difference between station pressure and barometric pressure, we can deal with finding the pressure.

If you set the reference altitude in the Kestrel to the local altitude, it will use those numbers to calculate the barometric pressure as reported by the weather bureau, i.e., referenced to sea level.

Don’t do that – unless you want to compare the numbers to check the calibration of your instrument …or the weather bureau’s. Remember the old saying that a man with one watch knows what time it is, while a man with two watches is never quite sure – unless he has an atomic clock, but, I digress. It’s the same with two pressure figures. They will be different – but probably not different enough to matter.

If you are using some other kind of pressure sensor, examine the figure bearing in mind the approximate pressure lapse rate of 1 inch of mercury per 1000 feet. If you’re at 10,000 feet, and your watch displays a pressure of 29.9 inches, it’s displaying a barometric pressure, rather than a station pressure.

Barometric pressure might be obtained from a local radio or television station, from the Automatic Terminal Information System (ATIS) broadcast at a nearby airport, or from the Internet.

Entering the Pressure into Ballistic Programs

A popular online ballistic program is JBM Ballistics. Down near the bottom of the screen are the atmospheric parameters, which look like this:

If you check "Standard Atmosphere at Altitude", you get the ICAO temperature and pressure at whatever altitude you specify, with the humidity set to zero.

That means that whatever temperature and pressure you might have entered in the input screen are completely ignored, and humidity is set to zero. For your reference, an ICAO Standard Atmospheric chart is included at the bottom of this article.

If "Pressure is corrected" is checked, the density is calculated using the pressure corrected for whatever altitude is entered in the altitude box. It means that the pressure you entered is from a source which corrected the station pressure to the sea-level-referenced barometric pressure, and the program corrects that pressure for altitude.

That's confusing to me, but I didn't write the program. It still uses the temperature and relative humidity entered in the appropriate boxes.

If "Pressure is corrected" is not checked, the density is calculated ignoring the contents of the altitude box. In other words, the programs assumes that you have entered the station pressure. It still uses the entered temperature and relative humidity in the air density calculation.

Nota Bene: Do not check both the "Std. Atmosphere at Altitude" and the "Pressure is Corrected" boxes.

Below is the Field Conditions entry screen from the PDA version of Exbal current at this time. There are various version of Exbal and Nightforce, but, with the exception of the inclusion of the density altitude option, all should work the same. 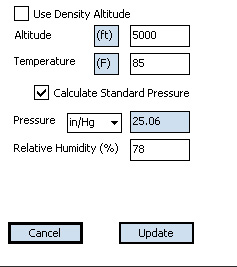 If what you know is the SLBP, enter that into the Pressure box, and enter your actual altitude, as well as the temperature and relative humidity. Check the box which says, "Calculate Standard Pressure."

If what you wish to have is a calculation for a density altitude, enter the density altitude in the Altitude box, and check the Use Density Altitude box. As shown below, by the graying out of the temperature, pressure, and relative humidity boxes, those come from the ICAO Standard Altitude, and are not available as inputs. Note that they agree with the values in the ICAO Standard Atmosphere Chart shown below. 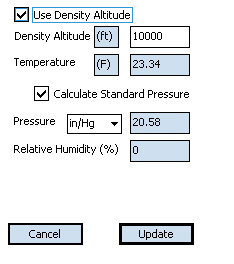 Below is the Presets screen from Field Firing Solutions. It works similarly to Exbal. If you have the station pressure, enter it in the Pressure box, and check the Stat box as shown: 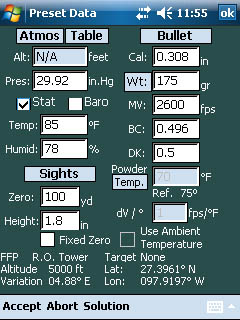 If what you have is the SLBP, enter it in the Pressure box and check Baro, as below. In either case, the program will use the locally entered temperature and relative humidity. 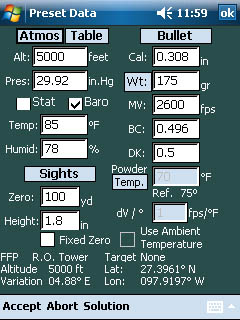 What If I Have Some Other Program?

Then you'll have to figure out how to enter the atmospheric parameters.

A good way to ensure that you have a good understanding is to experiment. Enter the environmental parameters you usually shoot in, and perform a calculation for a range you have actual shooting data for, preferably for a target which is more than 500 yards distant.

Then change the station pressure figure to, say, 5 inches of mercury less than what you usually have. When the program performs the calculation, you should note a marked decrease in the calculated elevation.

Also experiment with getting your program to perform the conversion from barometric pressure to station pressure. If, for example, you put in a condition of barometric pressure of 29.85 at an altitude of 6000 feet, and compare that with the results of a calculation made using a station pressure of 23.85 at 6000 feet, you should see approximately the same results from the elevation calculation. If not, you’ve goofed.

Experiment, bearing in mind the difference between station pressure and barometric pressure, and you’ll figure it out.

Remember this: the most accurate way to get any ballistic program to work is to have an instrument like a Kestrel or many watches which measures local atmospheric pressure, which we call the station pressure. Enter the station pressure, the temperature, and the relative humidity, and make sure that you're not using a program option to calculate the "standard atmosphere". 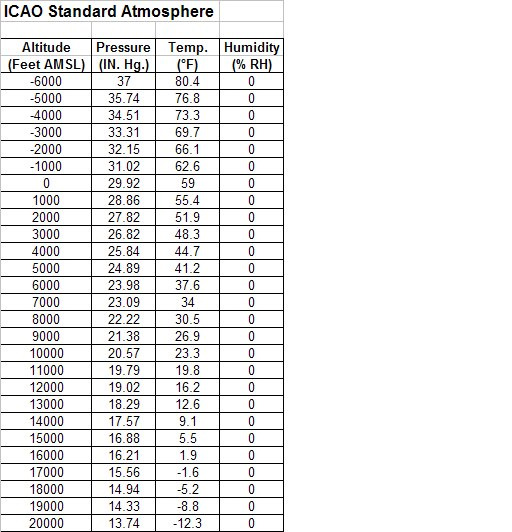 Revision Notes
1. A note was added on the ICAO Standard Atmosphere base conditions.

2. A change was made to reflect the fact that zero should be entered into the altitude field in Exbal when entering station pressure.

Permission is granted to print or photocopy the entire article intact, including this notice. All other rights reserved.